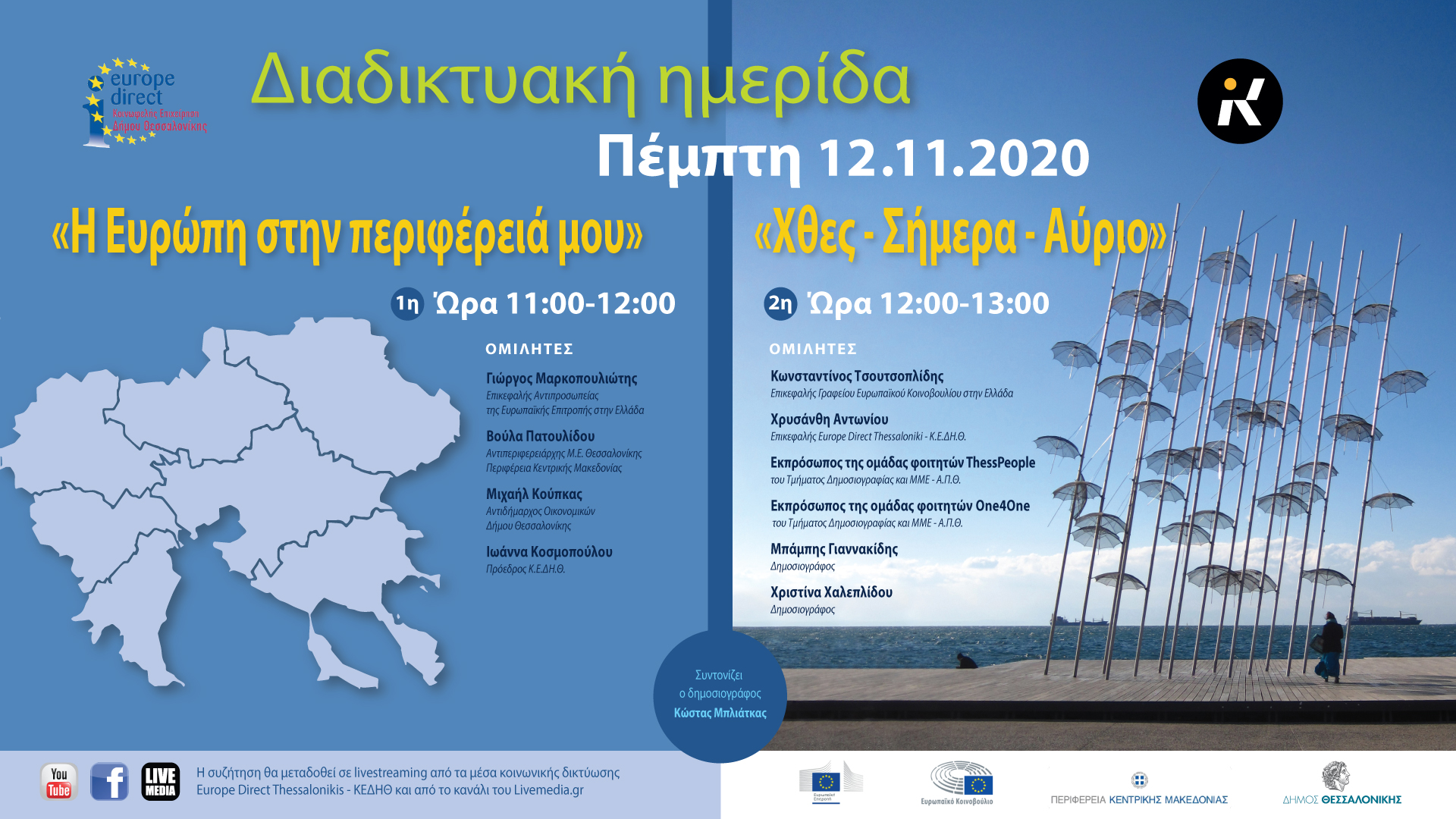 The internet conference held by the European Information Center of Thessaloniki, Europe Direct Thessaloniki - KEDITH, on Thursday 12/11/2020, with absolute title, was crowned with absolute success, entitled: «Europe in my Region / Yesterday - Today - Tomorrow ".

The event, which was promoted by the social media of Europe Direct and LiveMedia.gr, was attended by hundreds of citizens and presented the policies pursued by the EU for the benefit of citizens and related to the 7th EU budget and Cohesion Policy.

In the first part of the conference on: «Europe in my Region " the Head of the European Commission Mr. George Markopouliotis, in his position, referred to the utilization of European funding for the period 2014-2020 in Greece but also to the planning of Cohesion Policy for the period 2021-2027. Then the discussion took place on the topic: "How does Europe, with its projects and its presence, affect the lives of its citizens? " during which representatives of local authorities, Ms. Voula Patoulidou - Deputy Regional Director M.E. Of Thessaloniki of the Region of Central Macedonia, Mr. Michalis Koupkas - Deputy Mayor of Finance of the Municipality of Thessaloniki and Ms. Ioanna Kosmopoulou - President of the Public Benefit Enterprise of the Municipality of Thessaloniki referred to the way in which EU funding has been utilized, with a focus on the European Social Fund, and the benefits that citizens derive from it.

In the second part of the conference on: "Yesterday Today Tomorrow", giving the floor to the young people, the reporting competition that took place in the first quarter of the year was presented, with the homonymous title. A total of four teams participated in the competition, students of the Journalism and Cinema departments of IEK schools and Universities of our city, but due to the extraordinary health developments only two were able to send the necessary competition material. In this context, the representatives of the participating teams, Ms. Dimitra Stampouli - of the ThessPeople team, who was also the winning team of the competition, and Ms. Alexandra Pavlou - of the OneforOne team, shared with us their experience in reporting and of the contact they had with the citizens. During it, they addressed citizens of the city in order to investigate their perception of the image of the city in the past (yesterday), how they find that it has changed in the present (today) and what they expect for the future (tomorrow), setting as a basic benchmarks the funding-projects implemented by European social fund. The results of the competition were announced by Ms. Christina Haleplidou - Journalist and member of the jury of the competition in which also participated Mr. Babis Giannakidis - Journalist and Mr. Costas Bliatkas - Journalist and Writer.

The Head of the European Parliament Office, Mr. Costas Tsoutsoplidis, then asked the question "What is the European Union doing for its citizens", emphasizing the economic tools it is developing to support its member states, its development planning related to its environmental and digital transformation without abandoning the model of social cohesion that governs it.

The discussion was moderated by the journalist and writer Mr. Costas Bliatkas. Watch the day at the following links:

On the occasion of the declaration of 2023 as the European Year of Skills, on January 17th an informative event entitled "Young people in the European Union" was held at the K. Voutsas theater of the 2nd GEL of Thessaloniki. The main theme is the possibilities provided to young people...

Students of the General Lyceum of Intercultural Education of Evosmos attended an online educational day on Wednesday, January 11, 2023, with the main theme being the profile of the EU institutions and the opportunities that young people have through the European...

Funded Training of K.E.DI.Th Employees in the Theme of the Evolution of Technology for the Care of Persons with Disabilities.